In 2005, Clark School benefactor Robert E. Fischell and his family donated $31 million to establish the Fischell Department of Bioengineering and the Robert E. Fischell Institute for Biomedical Devices at the University of Maryland. The Fischell family's transformational gift was a major step in the Clark School's continuing rise into the ranks of the nation's premier engineering schools.

The Clark School announced the Fischell Family gift on December 19, 2005, in a ceremony in the Jeong H. Kim Engineering Building. 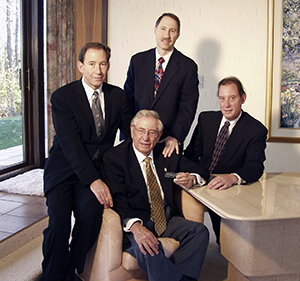 Scientist and engineer Robert Fischell has had two pioneering careers: his current one inventing life-saving medical devices, and a former one helping create the modern era of space satellites so critical to communications, entertainment, business and national security.

Fischell, who holds more than 200 patents, is the father of modern medical stents, lifetime pacemaker batteries and implantable insulin pumps. He is also the father of his closest collaborators: sons Dr. David Fischell, physicist; Dr. Tim Fischell, cardiologist; and Scott Fischell, M.B.A.; who share his passion for changing the world through inventive genius, hard work and philanthropy.

One of the results of their collaborations is a pacemaker-sized implantable computer that provides the earliest possible warning of impending heart attack. Fischell founded Angel Medical Systems Inc., where son David is CEO, to bring this technology into use. Named by his granddaughter Jennifer Fischell, Angel Medical is one of more than half a dozen companies, including Pacesetter Systems, IsoStent, NeuroPace, and NeuraLieve, that Fischell has founded since 1969 to develop his inventions. NeuroPace is developing a new implantable device for ending epileptic seizures. NeuraLieve is developing a magnetic pulse device that stops migraine headaches.

END_OF_DOCUMENT_TOKEN_TO_BE_REPLACED

On Thursday, May 19, 2016, President Barack Obama awarded Dr. Fischell the National Medal of Technology and Innovation (NMTI). This award marks the highest honor for technological achievement bestowed by the president of the United States.

Dr. Fischell and his family donated $31 million to establish the University of Maryland's bioengineering department and create an institute for biomedical devices. The Clark School announced the gift on December 19, 2005, in a ceremony held in the Jeong H. Kim Engineering Building. In recognition of the donation, the Clark School named the department the Fischell Department of Bioengineering, and the institute the Robert E. Fischell Institute for Biomedical Devices.
Fischell's sons David, Scott and Tim took part in the ceremony along with their own families. The Fischells saw the gift as their chance to make the world a better place.
"Wealth allows us to do good works and to remove impediments to bettering the human condition," Dr. Fischell  said.  "Our gift to the Clark School will help engineering students to develop their ideas to improve health care for human beings throughout the world."

The Kickoff of Capstone 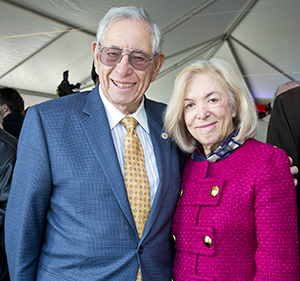 Mrs. Susan Fischell is the creator and sponsor of the Fischell Department of Bioengineering annual Senior Capstone Design Awards. In this competition, launched in 2009, the top three senior undergraduate project teams as selected by a panel of judges win monetary prizes donated by Mrs. Fischell and are invited to present their work to the public. The teams may also have the opportunity to have their inventions put on track for development at the Robert E. Fischell Institute for Biomedical Devices.

In support of Dr. Fischell's vision for the future of bioengineering, the department's Fischell Fellowship in Biomedical Engineering is a unique opportunity for talented and innovative graduate students interested in applied research and product design in the biomedical industry. The department has named Fischell Fellows since 2003.

"The finest goal that engineering can achieve is to improve the quality of life for millions of people throughout the world. Bioengineering and biomedical devices are the most direct means to achieve that goal." - Dr. Robert E. Fischell