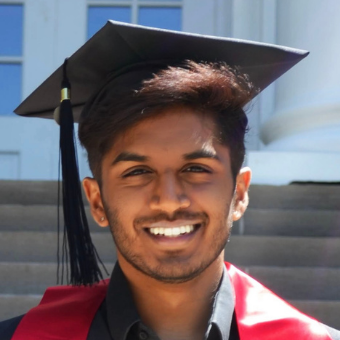 I can leave UMD now knowing that I have found my place and I hope to give others that same feeling.

Many bioengineering students pursue the field because of a human health cause or experience that inspired them. But, some students unexpectedly find a calling outside the classroom. For Fischell Department of Bioengineering (BIOE) senior Anish Kakarla, his calling became the University of Maryland South Asian Student Association (SASA).

SASA was founded in 2020 by 2021 UMD graduates Kavya Kumaran and Juhi Narula. After their graduation, Kakarla, then SASA’s marketing director, took over as president.

The organization was started as a way to connect students who identified with South Asian culture with one another to form a more cohesive community on campus. SASA’s mission was to have every South Asian feel represented, regardless of ethnic or religious identity. Additionally, the organization tries to best represent identities outside  – and intersecting with – the South Asian community, such as those based on gender, sexual orientation, or disability statuses.

“I can leave UMD now knowing that I have found my place and I hope to give others that same feeling,” said Kakarla. “SASA has also given me some of the best friends and brought me closer to my community. My best memories are with my board members staying up late and finishing up last-minute tasks before an event.”

The organization organizes both social and advocacy-based events. Similar to Greek Life, SASA has a Big and Little program that pairs first- and second-year students with mentors on campus. SASA’s advocacy events help promote representation on campus and raise awareness about topics and issues that affect the South Asian community.

Kakarla hopes SASA will continue to grow and promote the South Asian voice on campus.

While at UMD, Kakarla found that majoring in bioengineering  would enable him to tap into the health care field by way of medical device innovation. After graduation, he plans to pursue his master’s degree and would like to one day work with a medical device company. In addition, he noted that he would like to learn more about how coding and computer-aided design can promote important innovations within bioengineering research.