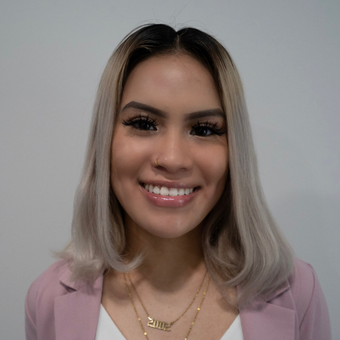 What excites me the most about bioengineering work is how critical this type of engineering is to improve the lives of patients.

Fischell Department of Bioengineering (BIOE) junior Ariana Capati has her twin brother, Angelo, to thank for inspiring her to attend the University of Maryland. A Fire Protection Engineering junior, Angelo was committed to joining the A. James Clark School of Engineering while in high school. He explained the advantages of attending the Clark School, which intrigued Capati.

Long before then, when the Capatis were in middle school, Ariana took part in an after-school program called Mathematics, Engineering, and Science Achievement (MESA), in which one of the students’ assigned tasks was to build a prosthetic arm. This challenge made Capati realize how fun designing, manufacturing, and prototyping were and it became the foundation for her budding love for bioengineering. .

“I am specifically interested in solving the main problem of prosthetic limbs, which is that prosthetic sockets are often uncomfortable,” explained Capati.  “It can take weeks or even years for a person to become comfortable with their prosthetic socket. Sometimes patients are even left with pressure sores and blisters.”

More than 30 million people worldwide are in need of prosthetics and orthotic devices, Capati said, noting that thanks to advances in technology, prosthetics are improving. Still, a driving factor preventing their use is comfort, she said.

“I want to be able to find which factors influence comfort – such as those pertaining to human anatomy – and solve this problem,” she said.  “What excites me the most about bioengineering work is how critical this type of engineering is to improve the lives of patients. I believe this field of engineering will be a key field in the medicine of the future.”

Beyond bioengineering, Capati is an assistant coordinator for the UMD College Park Scholars Peer Mentors Program. “I love the scholars' community and the opportunity to be a welcoming figure to make the transition into college easier for freshmen scholars,” she said.

As an assistant coordinator, Capati works directly with the Scholars faculty and staff to ensure that peer mentors and peer mentor captains appropriately support first-year students in their respective degree program. Capati also plans and organizes social and academic activities for students within the Scholars community, such as movie nights, resume building workshops, s’mores making, and academic schedule planning.

Capati is also the secretary for the UMD chapter of the Society of Hispanic Professional Engineers (SHPE). “Coming to UMD as a minority in a [historically] predominantly white major was very overwhelming,” Capati said. “But the members of SHPE were able to provide me guidance by giving me advice about classes, showing me where to get academic help, and being people I can go to for almost anything.”

Capati felt that SHPE offered her first sense of community at UMD. As such, she wanted to express her love for the community by serving on SHPE’s  executive board with the goal of further empowering the Hispanic community of College Park. As SHPE’s secretary, Capati participates in outreach at different events, including those hosted by ClarkLEAD and UMD’s First Look Fair. Capati’s responsibilities include reserving rooms for all SHPE events (GBMs, social events, networking events, partnered events, and more), taking meeting notes alongside the president, and helping advertise SHPE connect with the wider UMD community by making posters and flyers. Capati is also initiating a new chapter of SHPEtinas that focuses  on the Latina perspective within SHPE.