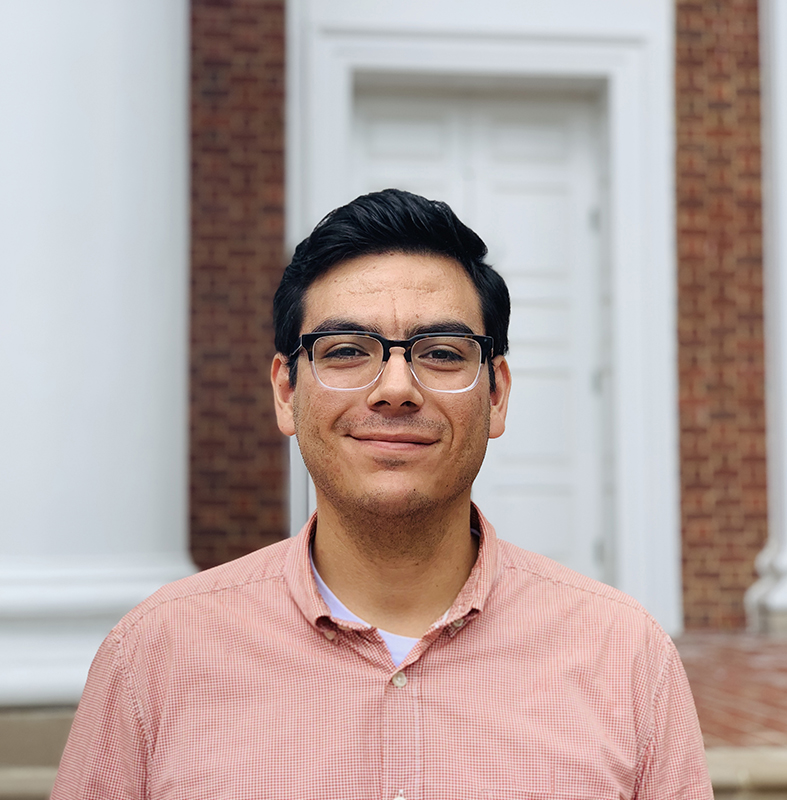 If I look back on it, I guess I got lucky that I enjoy what I do.

Dr. Leopoldo Torres, Jr. graduated from University of Maryland with his Ph.D. in Bioengineering in 2019.

The Fischell Department alumnus was born in San Fernando Valley, California to parents who had emigrated from Mexico. “My mother was 21 years old when she married my father.  I was born two years later in the San Fernando Valley,” said Leopoldo. “My sister came four years later and after that my parents split. I pretty much resided in Orange County throughout my childhood, but even there we moved around a lot. I was in six different schools by the time I was 12 because my mom was a single mom. She was juggling work, kids, and trying to provide for more. I remember my mom at one point working three jobs, to make sure we were ok. We didn’t have much growing up, but I never noticed it,” he adds.

Despite moving around often, Leopoldo achieved academic success in all of the schools he attended. He demonstrated an understanding of the importance of education early in life. “I opened a savings account when I was eight years old because I told my mom I wanted to go to college, and we had to save because we had no excess. Every birthday, Christmas or time I received money it went into that account,” remembers Leopoldo.  When he turned 14, Leopoldo's mother remarried and this provided more stability for the family, and an eventual move to Mission Viejo. “I went from being one of a thousand of Latinos living in Tustin to practically the only one in southern Orange County.  I felt really out of place, being the only one in honors classes,” he recalls.

Brent Pillsbury, History Faculty at Mission Viejo's High School observes: “Leo would often seek me out before and after class, and would talk about what's going on with him.  More than other students, he wanted to do well in school and had big dreams.  He did everything he could to pursue them.  I remember overhearing Leo and his friend pushing each other to excel academically.  I just played the role of a supporter - listening and encouraging where possible.”

Throughout his studies, Leopoldo gravitated to the sciences, and entered the University of California at Riverside (UCR) as a bioengineer on practically a full ride. “I really enjoyed physics. I thought I wanted to be a medical doctor, and in undergrad I was premed.  Before deciding on a major, I googled what degree merged physics and medicine, and that’s how I was informed of Bioengineering, so that’s what I did. My parents did not guide me at all through the academic process, so there wasn’t really anyone I could talk to about the college process.  If I look back on it, I guess I got lucky that I enjoy what I do,”

While Leopoldo was happy that he made it to college, he had no idea if he would succeed. “No one told me you should get this type of GPA or anything. My mom dropped me off at orientation and said ‘see you later.’  That was it. So I said to myself, ‘I guess I have to figure this out, too.’  I told myself if I could get at least a 3.0 my first quarter I would be satisfied. I did that, and it wasn’t hard. From there, I decided to challenge myself,” he recounts.

And he did just that. Leopoldo hunkered down for two years and academically excelled at UCR – no extracurricular activities, no parties, just the science library and classes. He was there to get an education. “I was on my own, my parents were not able to help me.  I basically spent no money.  I lived on ramen noodles.  There were some really tough times, and my parents didn’t know. At one point, I had $10 in my bank account for weeks. At UCR, I never felt alone because there were so many other people in the same boat, first generation students trying to make their way,” says Leopoldo.

“When I figured out that I could do well, my second goal was to get Tau Beta Pi honors. I considered that the highest version of recognition I could achieve.  When I got my invitation letter I was super pumped.  I remember that well – it was one of the happiest days of my college career,” adds Leopoldo.

Once his academics were on solid ground, Leopoldo started to venture out. One day, he and a friend decided to attend the Society of Hispanic Professional Engineers (SHPE) student chapter at UCR. “They were having elections, and the current board said ‘you should be part of the board.’ We said we didn’t know what we were doing, we just walked into a meeting. They convinced us to get involved, despite our initial hesitancy. We helped grow that org from scratch.  That work ended up being something I was most proud of doing with my classmates. What made SHPE successful was that we were all about support.  We tried to provide support to both ourselves and our chapter. I was able to start a mentorship program there. They recently reached out to me to be mentor to a current undergrad, and I am so happy that both the organization and the program is stronger than ever,” says Leopoldo. He eventually became Vice President of SHPE, and in his senior year the President of UCR’s Biomedical Engineering Society.

Concurrently to this community work and tutoring to make ends meet, Leopoldo serendipitously found an undergraduate research opportunity. Through extensive reading about rheumatoid arthritis, a disease both his mother and sister suffer from, he caught the attention of a faculty member at UCR who hired him to work in her lab. By his senior year, Leopoldo received a paid year-long plus summer research fellowship at the medical school.

The project also provided Leopoldo with access to the intersection between immunology and engineering – the area he hoped to pursue in graduate school.  And rest, as they say, is history.  Leopoldo ended up at the University of Maryland’s Department of Bioengineering, under the advisement of Dr. Peter Kofinas.

Recently, Leopoldo served as a postdoctoral scientist at the Volpe Research Center of the American Dental Association. He was the lead scientist responsible for developing and evaluating dental implants that have anti-microbial and tissue integration functionality.

“As far as getting to this point, there was no stereotype in my head of what I was supposed to be or do. I was aware of the stereotypes for people of my background but I never felt like I couldn’t do something,” concludes Leopoldo.

This is an excerpt from a story written by Anna de Cheke Qualls.