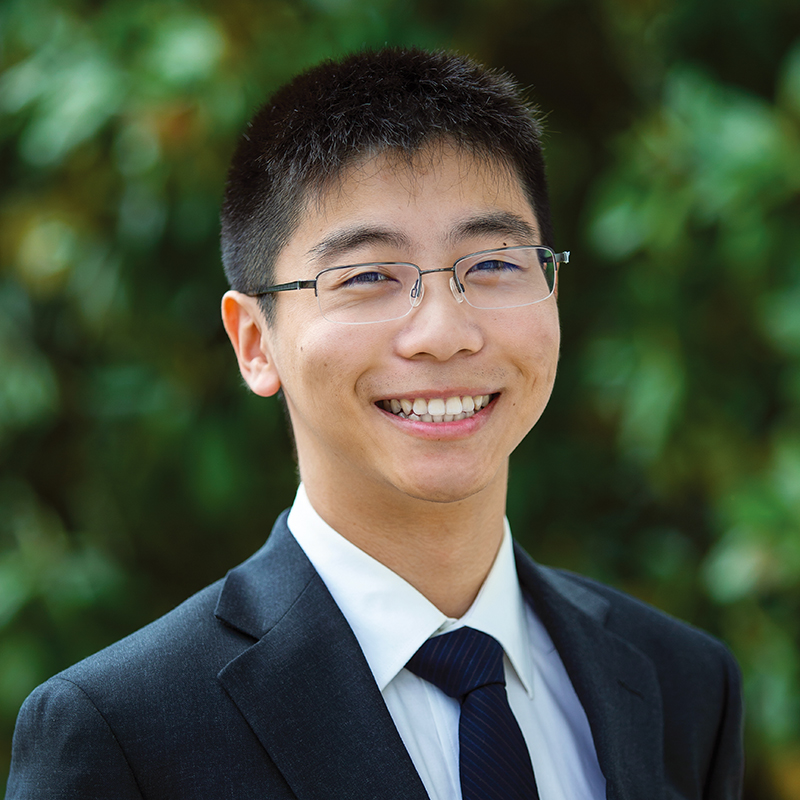 So early in his research career, he has already demonstrated an inherent ability to tackle challenging concepts with the fearlessness and resolve of a veteran scientist.

Fischell Department of Bioengineering graduating senior Eric Wang was awarded the University Medal, which recognizes the most outstanding graduate of the year.

The University Medal is awarded to the undergraduate who best personifies academic distinction, extraordinary character, and extracurricular contributions to the University and the larger public. This award is the highest honor the University can bestow on a graduate. UMD President Wallace D. Loh honored Wang  for this achievement at the University’s Spring Commencement Ceremony on May 24, 2019.

Although he came to UMD unsure of his career path, Eric is now a a passionate bioengineering researcher who will stop a movie or jump out of bed in the middle of the night when inspiration for solving a problem strikes.

Growing up in Montgomery County, Eric thought he would enter the healthcare field like his older sister, but she encouraged him to explore his own interests. One presented itself in 2016, when Eric joined the lab of Jeffery Klauda, associate chair and graduate program director in the Department of Chemical and Biomolecular Engineering, and found himself while sorting through a mountain of scientific documents and coding work on cell membranes.

“I discovered I liked the research part of it,” Eric says. “Not only did (professors) teach me about the field, I can come back to them for collaboration.”

Since then, Eric has been the lead or co-lead author for seven published papers in outlets like The Journal of Physical Chemistry B and Chemical Reviews, and presented at national meetings of the American Chemical Society and Biophysical Society. Eric's undergraduate work was comparable to what would be produced by a graduate student, Klauda says, and he was “one of the best scientific writers I have had in my lab.”

“Eric is a top-notch student and researcher. He is very hardworking and does not shy away from asking questions,” he says. “I have been impressed with his computational ability to quickly learn our techniques and to know when to ask versus figuring it out on his own.”

Already a 2018 winner of a prestigious Goldwater Scholarship, Eric received a 2019 Churchill Scholarship as well, which will fund his pursuit of a master of philosophy degree in chemistry at the University of Cambridge. He will then enroll in a medical engineering and medical physics doctoral program jointly run by Harvard University and the Massachusetts Institute of Technology.

A University Honors student in the Honors College, Eric has also received a National Science Foundation Graduate Research Fellowship, a Howard Hughes Medical Institute Research Fellowship, the Fischell Department of Bioengineering Outstanding Senior Award, the James W. Dally Endowed Scholarship and a National Merit Scholarship. In addition, he was a reviewer for The Journal of Physical Chemistry and The Journal of Molecular Modeling, a research mentor for high school students, a Bible study leader for Catholic Terps, and a member of the Knights of Columbus.