Methane, a greenhouse gas far more potent than carbon dioxide, is one of the leading causes of global warming. In the United States, landfills, cows, natural gas systems and other sources of pollution emit an amount of methane that has the same effect on global warming as 60 million households.

Recognizing this, the University of Maryland (UMD) International Genetically Engineered Machine (iGEM) team is looking to mitigate global warming by finding a more effective way to degrade methane using biology. To support their efforts, the team is hosting a Launch UMD campaign, which runs until July 28.

Currently, there is no cost-effective way of removing methane from the atmosphere, the team said. Due to methane's adverse effects on the environment, the government has ordered landfills to fund the construction of large systems of pipes to collect and burn their methane. Unfortunately, cows, natural gas systems, and most other sources release methane in dilute quantities that cannot be controlled. This allows methane to accumulate in the atmosphere, where it traps harmful radiation, contributing to global warming and deteriorating the health of our planet.

In nature, microorganisms called methanotrophs eat methane from the atmosphere, but they are very fragile and inefficient.

Using the approach of synthetic biology, which views organisms as machines that are programmed by DNA, the iGEM team aspires to borrow parts from methanotrophs to construct a more effective biological machine to remove methane. If the team's project succeeds, its members will have created a new type of cell that can consume methane at the source, whether it be a landfill, a cow, or a natural gas system. 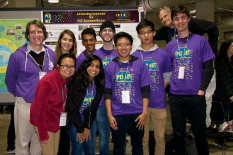 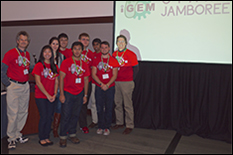