Novel in vitro biophysical models designed in the Fischell Department of Bioengineering (BioE) that help explain how mechanical changes in blood vessel behavior cause a cascade of effects leading to the progression of cardiovascular disease have been featured in Blood, a high-impact journal produced by the American Society of Hematology and the most cited peer-reviewed publication in its field. BioE graduate student Kimberly Stroka and her advisor, Associate Professor Helim Aranda-Espinoza, produced the results.

Leukocytes, also known as white blood cells, are the human immune system's first line of defense, called to respond to injury and fight disease. In order to travel to the site of an infection they must exit the bloodstream by crossing the endothelium, the single layer of cells lining our blood vessels, using a process known as transmigration. Ironically, the cells designed to protect us from harm may unintentionally contribute to the development of atherosclerosis, a form of cardiovascular disease, as they go about their business.

Atherosclerosis is associated with the stiffening of the blood vessels' subendothelial matrix, the surface to which the endothelial cells are attached. The number of leukocytes attempting to transmigrate increases in these compromised surroundings. Many of them become stuck and subsequently damaged, building up into a plaque that could block a blood vessel, causing a stroke or heart attack.

Stroka and Aranda-Espinoza hypothesized that as the endothelial cells "feel" the matrix stiffen beneath them, they undergo biophysical changes in response that negatively affect leukocyte transmigration, creating this risky situation.

To study these behaviors under controlled conditions, they created a new kind of model blood vessel. They started with hydrogels of varying stiffness to represent human examples of the subendothelial matrix that were too soft, healthy, and hard enough to be associated with cardiovascular disease. A monolayer of endothelial cells was grown on each of the gels' surfaces to create an endothelium. After inducing an inflammatory response in the endothelial cells, they added human leukocytes, and used time-lapse microscopy to observe their transmigration, live and in real-time.

Above: This movie is a phase contrast microscopy sequence of human leukocytes (white blood cells) migrating along and transmigrating through an endothelial cell monolayer. Endothelial cells are the larger, darker cells in the background. Leukocytes are the smaller, bright white cells while on top of the endothelium. As the leukocytes transmigrate, they darken in phase contrast microscopy, allowing us to easily observe the process. The scale bar is 50 microns, and the movie is played at 100x real time speed. Video courtesy of Kimberly Stroka.

Although it is known that patients suffering from atherosclerosis experience an increase in the number of leukocytes attempting to transmigrate, what has not been clear is whether this initiates the disease or is a response to it, because it also isn't known whether the disease causes the stiffening or the stiffening causes the disease. Using their models, Aranda-Espinoza and Stroka may have discovered an important clue.

"The endothelial cells contract in response to the stiffening of the subendothelial matrix," Stroka explains. "It's like playing tug-of-war on pavement versus a mud pit. It’s easier to get traction on the hard ground. These contractile forces open larger intercellular gaps. What our paper is suggesting is that the stiffening is making the disease worse by disrupting endothelial cell barrier function and allowing too many leukocytes to pass through."

Stroka says their study paves the way for related research, such as whether subendothelial matrix stiffness affects the transmigration of other cell types, including metastatic cancer cells. She's also optimistic that what they've learned could lead to new approaches in diagnosis and treatment, such as identifying stiffening in the matrix before its most deadly symptoms, a heart attack or stroke, occur, or through treatments that restore elasticity to stiffened blood vessels before plaques can form. 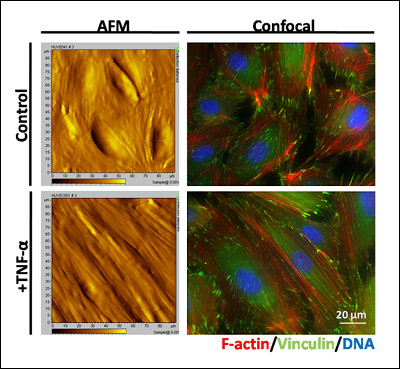