The Fischell Department of Bioengineering (BioE) extends its congratulations to graduate students Omar Ayyub (advised by Professor Peter Kofinas) and Michael Wiederoder (advised by Department Mechanical Engineering professor Don DeVoe), who were among only 20 students from throughout the Clark School chosen to join this year's Future Faculty Program cohort.

The Future Faculty Program, launched in 2007, was created to prepare students for academic careers in top-50 engineering schools by helping them hone their skills in areas such as technical and grant writing, curriculum development, teaching, research, oral presentations, and interviewing. The program includes seminars, a teaching practicum, and a research mentoring practicum, and takes three to five semesters to complete. Participants are known as Future Faculty Fellows.

Ayyub, who earned his B.S. from the department in 2010, is the recipient of a 2012 National Defense Science and Engineering Graduate (NDSEG) Fellowship and the Clark School's 2010 Outstanding ASPIRE Student Research Award. He conducts his research in Kofinas' Functional Macromolecular Laboratory, where he develops biosensing polymer films designed to change color when the presence of a target molecule. The films could be used in applications ranging from food safety to bioterrorism defense.

Wiederoder, a National Science Foundation Graduate Research Fellow, joined the department in Fall 2011 after earning his M.S. in Food Science at the University of Maryland. Based in DeVoe's MEMS & Microfluidics Laboratory, he studies novel microfluidic biosensors. His project's goal is to create a low cost sensor for medical diagnostics in resource poor environments. 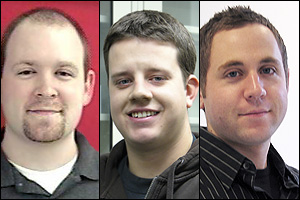