On Tuesday, March 7, 2017, the University of Maryland (UMD) Robert E. Fischell Institute for Biomedical Devices and RTI International welcomed nearly 150 representatives of Maryland’s medical device ecosystem to a daylong event focused on bringing products from invention to market in the state. The event, Medical Device Innovation in Maryland: from Technology to Lab to Market, took place at the UMD campus in College Park, and culminated with a tour of the soon-to-be new home of the A. James Clark School of Engineering: A. James Clark Hall.

“This is the start of an incredibly exciting time for biomedical devices in Maryland – and you’re here at the beginning,” University of Maryland Provost Mary Ann Rankin told attendees.

“The [Maryland] Department of Commerce started down this path almost a year ago in conjunction with the National Institute of Standards and Technology (NIST), the University of Maryland, College Park, Johns Hopkins University, and some industry partners in trying to pull together sectors from academia and industry to help build a medical device ecosystem here in Maryland,” said Brad Fackler, Senior Director of the Maryland Department of Commerce’s Office of BioHealth and Life Science. “Now, a year later, we see the efforts are underway.”

Fackler noted that Maryland Governor Larry Hogan laid out an action plan for the growth of biohealth in the state, for which Bob Storey (principal, The MVR Company) and Marco Chacón (founder, Paragon Bioservices) are chairing subcommittees.

“We’re making significant headway in the development and growth of the medtech industry here in Maryland,” Fackler said. “In conjunction with the University of Maryland, College Park and the University of Maryland, Baltimore, we’re working with the Center of Medical Technology Policy, the MedStar Institute for Innovation, and others to develop a center of excellence in medical devices that will serve as a resource to help grow these companies in Maryland. Additionally, in conjunction with the MedStar Institute for Innovation, we’ll be looking to formalize an international initiative to recruit medical device companies from Israel, Spain, Germany, South Korea, and other countries seeking Food and Drug Administration (FDA) clearance to work here in Maryland to develop and test their devices.”

Additionally, Fackler noted that, through a $70 million NIST award, the University of Maryland, Johns Hopkins University, and several industry partners will establish a biopharmaceutical center through the National Institute for Innovation in Manufacturing Biopharmaceuticals (NIIMBL), which will bridge medical devices along with cell and gene therapies.

“This forum today demonstrates that conversions of all these initiatives are happening,” Fackler said. “The state of Maryland is committed to pulling these initiatives together to build Maryland’s medical device ecosystem with the stated goal of becoming an international epicenter for growth and development of the medical device industry in efforts to accomplish three objectives: to help patients and improve health outcomes for Maryland citizens, to create job growth and economic vitality here in Maryland, and to enhance medical technology development in Maryland.”

More than two dozen medical device experts from industry, academia, and government helped lead eight sessions, carrying participants through the lifecycle of a medical device – from fruition to navigating regulatory processes, to finding success in the marketplace.

“We are standing at the microcosm of medical device innovation in Maryland,” said William E. Bentley, UMD Distinguished University Professor and inaugural director of the university’s Robert E. Fischell Institute for Biomedical Devices. “We represent what I think could be an epicenter for medical device innovation and development, unlike anywhere else in the United States.”

Demonstrating a key area of innovation that carries tremendous growth potential, Bentley shared his insights on bridging the communication gap between microelectronics and biology.

“If you think about electrons and protons in the device world, and ions and small molecules in the biological world, you also call to mind the industries that have spun out of these technologies – and the fact that they don’t talk to each other,” Bentley said. “Fundamentally, there are gaps in the communities and how they talk to each other, and there are gaps in the fabrication of devices.”

Many of the solutions exist within the realm of synthetic biology, Bentley noted. By engineering cells, Bentley and fellow UMD researchers have applied electrochemistry techniques to brainstorm everything from blood tests to help diagnose schizophrenia, to Bluetooth applications for monitoring the gastrointestinal tract.

“When you think about it, the arm is a pretty remarkable thing,” McLoughlin said. “The question was, could we really tap into the brain’s innate ability to control complex devices and utilize that to control a prosthetic? To achieve this, you have to work both with people who can make miniaturized motors to create a finger with humanlike strength, as well as with people who understand how to decode signals from the brain. And, those are not groups that normally work together.”

Further illustrating the need to carry innovation through to the marketplace, Lex Schultheis of the Robert E. Fischell Institute for Biomedical Devices highlighted the growth of additive manufacturing in Maryland and the obstacles creators must overcome to put products in the hands of patients and clinicians.

“Since additive manufacturing carries great promise – with some obstacles – where do we begin?” he asked. “You start with a UMD undergraduate in a t-shirt and jeans, who works Friday nights in a lab here, and you build a very fast 3-D printer.

“One of my jobs here at Maryland is to help the FDA develop the tools to make the review process for new industries even faster,” he continued. “We’re trying to work in concert with FDA so that they have the scientific information to speed along their reviews – we want to advance industries.”

To do this, Schultheis and his fellow researchers are working with the easiest, lowest threshold devices – Class I and Class II exempt devices, for which the FDA does not require pre-market review.

“Your product development is not a single line,” Brooks said. “There’s going to be a lot of iteration. If you can do a lot of thinking up front, you’ll be better off in the longer run… You need to think about what problem you’re trying to solve – design to it, test to it – and the FDA can be a wonderful partner. They have expertise that is not known to the public, including some of the most incredible scientists and reviewers, and they can be true partners in innovation.”

“Unlike in the regulatory setting – where there’s one regulator – there are hundreds, if not thousands, of payers, and there are huge variations in how they look at evidence and what they consider actual evidence,” he said. “It varies by category, and it is highly inconsistent… That is partly why I think the work of the FDA is going to be to try to bring some of these payers together in the meeting with the FDA. It’s very important because it’s useful to actually set the goal line in advance so that you know what you’re shooting for.”

Additionally, featured speakers discussed how innovators must determine early if or how their product can be used commercially.

“How does a company know when it’s ready to transition from what we call ‘Frankenstein prototyping’ to a commercial format, something that’s going to look like the product that’s going to be used commercially?” asked Jenny Regan, co-founder and CEO of Key Tech. “There are a number of factors that you have to have the answers to. Does the technology perform – not just once, but does it work repeatedly and does it work such that it meets performance requirements? Is it technology that is going to be transferrable to a use case where a user – whether that user is a trained lab technician or a patient in his or her home – is going to find that the product meets their needs?

“There are companies that do market research – which includes identifying the size of markets, identifying regulatory pathways and university pathways, and establishing that there is a market for that product,” she continued. “But, then there is another step, which is making sure your design is laser-focused, in part, by going out and doing user observation studies, bringing models and renderings out to users and walking through the workflow with them.”

Taking what early discussions revealed about the innovation-to-market process an extra step, several featured speakers addressed the challenges – and opportunities – associated with building the medical device ecosystem in Maryland.

“If you think about it, it’s not really the responsibility of the universities or companies to stay here in Maryland,” Storey said. “Their responsibility is to get their technology into the hands of patients, get them into use. We need to create an environment that allows those seeds to grow, that actually generates operational support.

“How do we support the growth of the ecosystem that is needed by these companies?” he continued. “How do we attract some of the larger device companies [to Maryland]? We’re not going to turn Boston Scientific into Baltimore Scientific – we’re not going to move their headquarters into Maryland – but, there are ample opportunities for us to utilize centers of excellence to attract development offices, health economics offices, and those who are interested in tapping into the unique resources we have between the institutional centers of excellence and federal resources that exist here. There is quite a large effort endorsed by the FDA, CMS, private payers, and device companies to look at Maryland as a testbed for this process of examining technologies, how they come through the reimbursement process, and how they come through the regulatory process, and develop some predictability coverage at the end of that time period.”

Recognizing this, Bentley noted that the future looks promising, given the tremendous influx of bioengineering students and researchers to institutions like the University of Maryland and Johns Hopkins University.

“There are currently 440 undergraduate students in the Fischell Department of Bioengineering at the University of Maryland, and there is a similar number of biomedical engineering students at Johns Hopkins University,” he said. “This is our talent, and we can nurture these students – and future generations of bioengineers – by having events like this. I’m often asked, ‘What are we going to do from here on out?’ We’re going to build on this momentum and continue to bring together innovators and experts from academia, industry, and government. All of you here today are enablers, and there is a huge number of people out there who want to be enabled. Together, we can help shape the future of medical device innovation in Maryland for years to come.”

This event was made possible with sponsorship support from the Federal Laboratory Consortium for Technology Transfer, the Federal Laboratory Consortium—Mid-Atlantic Region, the Maryland Department of Commerce, the Maryland Manufacturing Extension Partnership, mdPACE, the NIST Manufacturing Extension Partnership, and RTI International.

The next medical device innovation in Maryland event is slated for fall 2017, following the ceremonial opening of the University of Maryland's A. James Clark Hall. Those who did not attend the March 7th event but would like to receive information about upcoming events hosted by the Robert E. Fischell Institute for Biomedical Devices, RTI International, and related partners can submit their contact information online or email fischellinstitute@umd.edu.

Photos from the March 7th event are available for download. 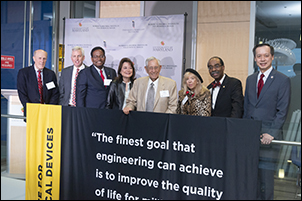