A bacterium that preys on pathogens, bioengineered by Clark School Department of Chemical and Biomolecular Engineering (ChBE) alumnus Matthew Wook Chang (Ph.D. '03), has been featured in Nature, one of the world's most prominent international journals.

In a September 11 column, author Mark Peplow describes how Chang, now a professor Nanyang Technological University in Singapore, created a strain of E. coli that seeks and destroys the antibiotic-resistant bacterium P. aeruginosa, a leading cause of hospital-acquired infections.

This is not the first time Chang has recruited E. coli to fight P. aeruginosa: In 2011, Nature, Molecular Systems Biology, and The Scientist featured his creation of E. coli that respond to the presence of P. aeruginosa first by finding it, then manufacturing a targeted antibiotic protein called pyocin. The E. coli swell with the antibiotic until they burst, releasing the pyocin onto P. aeruginosa and killing them both.

It's a noble sacrifice, but thanks to some modified tactics, it's no longer necessary. Chang's team is now genetically engineering E. coli to produce microcin S (MccS), a killer peptide, instead of pyocin. MccS is a much smaller molecule, so the E. coli can secrete it when necessary and live to fight another day. The improved bacteria also manufacture a nuclease (enzyme) called DNase I, which they use to penetrate and break up the biofilm that holds colonies of P. aeruginosa together.

Both versions of Chang's E. coli have another important advantage: They exclusively hunt and kill P. aeruginosa, leaving good bacteria, like those that aid digestion, alone. This is because they only respond to a specific molecule P. aeruginosa bacteria excrete to communicate with each other as they form a colony and initiate an infection. Once the molecule is detected, the modified E. coli "activate" and track it back to its source, manufacturing their antibiotics along the way.

Fischell Department of Bioengineering professor and chair William E. Bentley, Chang's former advisor and an expert on E. Coli modification, is excited about the new developments. Commenting on the work in Nature, he describes Chang's particular combination of tactics as "innovative" and "totally new."

Read "Set a bug to kill a bug," by Marian Turner online at Nature 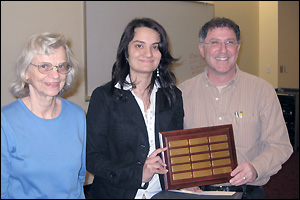