"This is a completely new, all-biological version [of our nanofactories]...[They] are self-guided and targeted. We've demonstrated for the first time that they're capable of finding a specific kind of bacterium and inducing it to communicate, a much finer level of automation and control."

In 2007, Fernandes, Bentley and their colleagues proposed a new way to fight bacterial infections using nanofactories, engineered molecules that could alter the exchange of signaling molecules, a form of cell-to-cell communication known as quorum sensing. When a certain quantity of signaling molecules is present, it indicates to a population of bacteria that a quorum, or specific quantity of them, has been reached, and they will respond with a predetermined action that could lead to a disease state. Slowing or stopping the communication that leads to pathogenic activity could shut down an infection in progress, while "tricking" bacteria into action before an actual quorum has been reached—that is, before they're organized enough to do harm—could provoke a natural immune system response capable of stopping them without the use of drugs.

Because nanofactories are designed to affect communication instead of trying to kill the bacteria, they could help treat illness in cases where a strain of bacteria has become resistant to antibiotics. Nanofactories could also reduce or eliminate the side effects associated with antibiotics because they can be guided directly to the infection site rather than having to travel throughout the body. The Bentley Group envisions the use of nanofactories as the next big step in antimicrobial treatment.

Their latest nanofactory design is, according to Bentley, a leap forward. "This is a completely new, all-biological version," he says. "Our original nanofactories contained magnetic particles, and were guided to a target site using magnetic fields. Once on site, they manufactured and delivered molecules that affected communication in any cells they encountered. The new nanofactories are self-guided and targeted. We've demonstrated for the first time that they're capable of finding a specific kind of bacterium and inducing it to communicate, a much finer level of automation and control."

The nanofactories' ability to alter cell-to-cell communication isn't limited to fighting infections. "Quorum sensing and signaling molecules are actually used to accomplish a lot of things," Bentley explains. "Sometimes disease develops because communication is not taking place—a good example is digestive disorders that involve an imbalance of bacteria in the digestive tract. In that case, nanofactories could be used to start or increase communication instead of disrupting it."

The new nanofactories self-assemble when their components are bound together in a controlled chemical reaction facilitated by a protein. They consist of an antibody, which is used for targeting and designed to latch onto the surface of a specific type of bacterium; and a three-step sensing, synthesis and assembly module. The module identifies raw materials near the targeted cell that it can collect and use to manufacture a "universal" signaling molecule known as autoinducer 2 (AI-2), which is used by over 70 species of bacteria.

In tests, the biological nanofactories were introduced to a mixed cell culture in which no quorum sensing was taking place. The nanofactories attached themselves to cells of the correct type, manufactured AI-2 from surrounding molecules, and delivered it to the bacteria's cell surfaces. The presence of AI-2 prompted the cells to start signaling, responding as they would during normal quorum sensing. 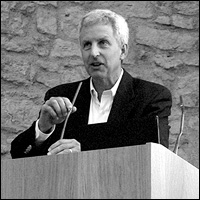 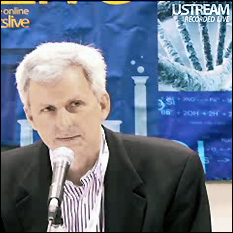 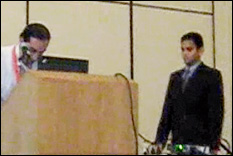