Department of Chemical and Biomolecular associate professor Srinivasa Raghavan and his advisee, Fischell Fellow and bioengineering graduate student Matt Dowling, won the attention of a group of venture capitalists and the title of "Best Inventor Pitch for Bioscience Day 2008" for their presentation of "nano-Velcro", a biomaterial they invented capable of stopping bleeding, particularly in situations where surgical help is not immediately available.

Sponsored by the university's Office of Technology Commercialization, the College of Chemical and Life Sciences, and the A James Clark School of Engineering's Maryland Technology Enterprise Institute (MTECH), the second annual "Professor Venture Fair"—part of the University of Maryland’s annual Bioscience Research & Technology Review Day—gave faculty and inventors the opportunity to pitch their new technologies to a team of five venture capitalists and entrepreneurs from the region. Presenters were judged based upon clarity of pitch and commercial viability.

"Dowling [in his pitch] addressed all of the questions that needed to be answered for the judges to determine that there is a real market opportunity here," says Jim Chung, director of MTECH's VentureAccelerator Program.

Dowling and Raghavan's nano-Velcro is a new, patent-pending biomaterial they are developing into two products: a sponge that is applied directly to a wound to stop hemorrhaging, and a spray that halts blood loss and seals tissue in a variety of situations, from minor surgical bleeding to life-threatening arterial punctures. Both products can be gently removed after wounds heal. Pre-clinical testing is underway for both the sponge and spray.

Dowling, Raghavan and their colleagues create nano-velcro by adding nano-"hooks" to the biopolymer chitosan, which is derived from the shells of crustaceans such as crabs and shrimp. The hooks allow for reversible, Velcro-like interaction between the chitosan and blood and tissue, strong enough to control bleeding but gentle enough to be removed from the patient without creating further damage. They also allow the chitosan to act directly and more effectively in blood coagulation and wound healing. The use of the nano-"hooks" has lead Dowling to use the the moniker "nano-Velcro" to describe the technology. A patent application is pending.

"More than anything, this award validates excitement about our technology from investors," says Dowling. "We're very confident in our technology, but selling it is a separate and distinct challenge. Today was a good indication that venture capitalists are starting to buy into what we're selling."

Dowling launched Remedium Technologies Inc. in 2007 to bring the invention to market. The company took second place in the 2007 University of Maryland $50K Business Plan Competition graduate student category, winning $8,000. Remedium has since taken second place in the graduate student division of the 2008 New Ventures World Competition at the University of Nebraska, winning $3000; and has participated in both the Rice Business Plan Competition and the Moot Corp Competition held by the University of Texas at Austin. In August 2008, Remedium received a $103,950 Maryland Industrial Partnerships project award to further develop its technology.

"This event, along with the information technology Professor Venture Fair at the Institute for Systems Research Symposium in the spring, offer the best window into the most promising science and technology innovations and potential startups coming out of the University of Maryland," says Dean Chang, director of MTECH's venture creation and entrepreneurship education programs. "Since we started these Professor Venture Fairs just over a year ago, all three winners of the Best Inventor Pitch have gone on to form exciting companies, which says as much about the growing entrepreneurial culture here on campus as it does about the quality of these inventions."

Visit the Department of Chemical and Biomolecular Engineering web site » 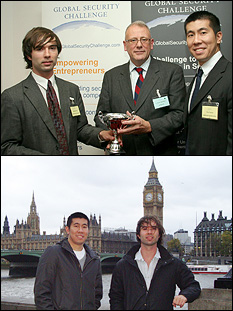 Dowling Named A Maryland Innovator of the Year 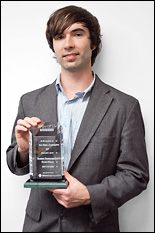