White plans to achieve his goal by replacing a key component used in surface-enhanced Raman spectroscopy (SERS), a powerful sensing technique that determines the presence, amount and identity of substances in a sample by the way light from a laser scatters when shined on it. The "surface" in SERS, called a substrate, intensifies the scattered light, allowing the detection of a target substance measurable only in molecules. While this makes SERS a powerful tool, its use has been limited by the difficulty of making the substrates, and the cost and short shelf life of prefabricated ones.

Previously, White and his advisee, BioE graduate student Wei W. Yu, demonstrated that they could create SERS substrates by fabricating silver nanoparticle-based chemical sensors on sheets of pure cellulose paper using a modified, $60 inkjet printer. Once the system is set up, no expertise is needed to manufacture them.

The current proposal, "Paper-Based Surface Enhanced Raman Spectroscopy (P-SERS) for Biosensing Using Inkjet-Fabricated Devices," describes how White and his team will extend the technique to create paper biosensors with probes made out of peptides and nucleic acids embedded in the cellulose paper matrix. The devices will take advantage of the paper's natural fluidic properties to flow biological samples past the probes.

Lateral-flow P-SERS biosensor for DNA sequence detection. The paper's natural ability to wick fluid is used to guide the sample past the probes.

White is confident P-SERS will have a "transformative" impact on the field of bioanalytics thanks to its combination of low cost, ease of production, and portability.

"Paper-based biosensors are an excellent fit for the diagnosis of epidemic pathogens in developing countries, such as hepatitis, tuberculosis, and HIV," he says. "We're predicting that our printed devices will only cost a few cents each to produce, compared to devices using other current techniques that cost anywhere from $1–$10 each. That's significant where resources are limited."

The biosensors would also be effective in situations where a large population must be screened quickly and inexpensively, such as for norovirus on cruise ships, the flu in schools and on college campuses, drug resistant bacteria in hospitals, and pathogens or toxins in emergency shelters following natural disasters.

"Paper-based swabs can also be used for chemical sensing," White adds. "This could include pesticide detection on produce, explosives detection, and field-based forensic analyses. We envision paper-based dipsticks for field testing of water for pollutants and waste products from hydraulic fracturing."

P-SERS will also enable educators to introduce biosensor technology to students who would typically be years away from the opportunity. White plans to create inkjet fabrication and paper-based analytics projects for both undergraduate engineering students and high school students enrolled in BIOE 100, a dual high school/college credit course designed to prepare students for success in science and engineering majors.

The NSF CAREER program supports the career development of outstanding junior faculty who most effectively integrate research and education within the goals and missions of their programs, departments, and schools. White is the fourth assistant professor since the department's launch in July 2006 to receive a CAREER Award, preceded by Joonil Seog (now with the Department of Materials Science and Engineering) in 2011, Adam Hsieh in 2009, and Helim Aranda-Espinoza in 2007. 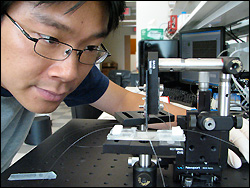 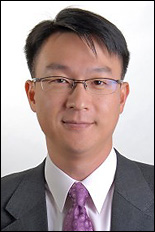